Ultimately, an executor must distribute the estate's net assets to the heirs (see Guide: Making Distributions for an explanation of the overall distribution planning and execution process). 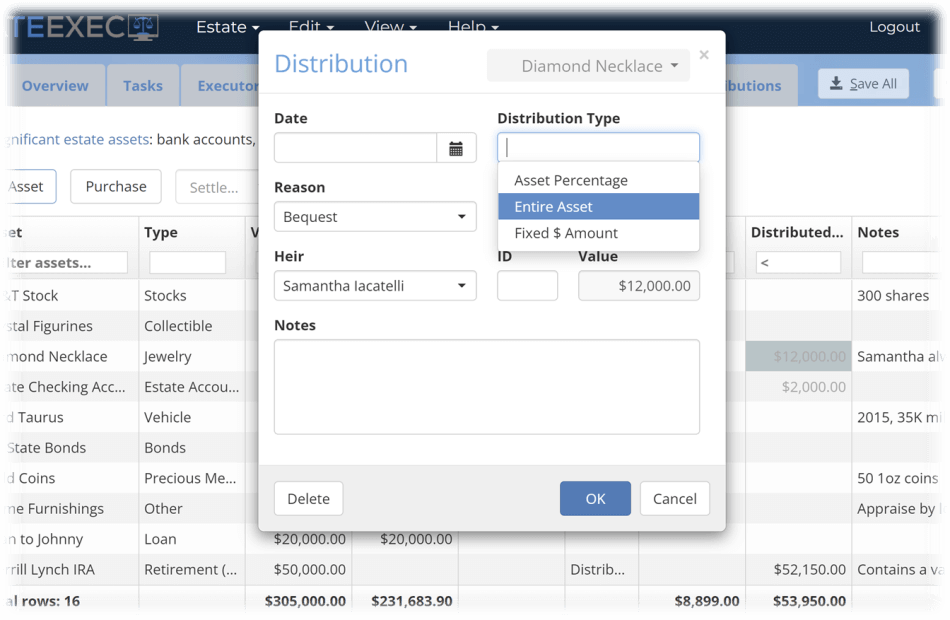 A distribution represents the assignment of cash or an asset to a given heir. You can define a distribution any of the following ways (use whichever method is easiest for you: they all accomplish the same thing):

In the top right of the Distribution dialog you will see an Asset dropdown which you can use to select the asset you want to distribute. In the example diagram above, the "Diamond Necklace" is being distributed (and the selection is grayed out and unchangeable since in this example we started the process by clicking that asset's Distributed cell).

By default, EstateExec will fill in the distribution date with today's date. You can change the date as desired, and you can also choose to clear the date, leaving it blank to indicate that this is a future plan that has not yet occurred (it can be very helpful to establish such planned distributions before actually distributing anything, so you can ensure that the overall outcome will be as desired). Once you set a distribution's date, the item is considered to have been physically delivered to the heir; until then, it is only allocated (e.g., assigned) to that heir.

Note that if you are filtering the Distributions table, you can select "Discretionary" and the table will include both standard allocations and heir requests, since both are in the same legal category, under the executor's discretionary control.

You can define the type of distribution in one of 3 ways:

Some other notes about partial distributions:

It's common to have to distribute certain percentages of the estate to particular heirs. This is easy enough if the estate is simply a pool of cash, but gets a little more challenging when there are assets that will not be liquidated before distribution.

You can also see everything you've allocated for a particular heir by going to the Distributions tab and filtering the Heir column by the desired name. You can see how much you've actually distributed to that heir by further filtering the "Done" column with "Y" (for "Yes").

Once an asset has been completely distributed (or settled in some other way), the asset's "Value Now" in the Asset table becomes blank since the asset is no longer in the estate.

If a distribution has not yet been assigned a date, the asset's Value Now will be as yet unaffected by that distribution

If an asset has only been partially distributed (e.g., 40%), only the percentage of the those distributions are removed, and so there may be some remaining asset "Value Now" until the rest of the asset is distributed.

An asset's cost basis is proportionately allocated to each distribution, so that the heirs can understand their cost basis when and if they eventually decide to sell the inherited asset. For example, if the heir inherits 20% of an asset, 20% of the asset's current cost basis will be recorded with the distribution. See also Manage Asset Cost Basis.

You can do some very helpful things with EstateExec tables. For example,